William Hogeland speaks and writes on a variety of American history topics, with a special focus on the all-important conflicts between Alexander Hamilton — bent on founding the United States as a dynamic, expansive, world-dominating phenomenon — and the working-class populists of the day, who demanded democratic regulation of American wealth. Political fights we’re having today over taxation, debt, banking, Wall Street, equality, regulation, distribution — fights over money — have their origins in this foundational clash, which grew literally violent in the 1790’s.

Hogeland has been telling these stories to responsive audiences since 2006. Lately, with the success of “Hamilton: an American Musical,” his services have been in even greater demand for corporate conferences and other organizations and events.

Hogeland is the critically acclaimed author of the narrative-history trilogy Wild Early Republic, bringing to life for general readers the startling impulses driving the American founding and the elemental conflicts that are often ignored. The trilogy is composed of The Whiskey Rebellion (Simon & Schuster); Declaration (Simon & Schuster); and Autumn of the Black Snake (Farrar, Straus and Giroux), which spent three weeks on the indie-bookstore bestseller list and was a finalist for the Army History Foundation’s Distinguished Writing Award.

Hogeland’s study Founding Finance is published by University of Texas Press; his collection of essays on public history, Inventing American History, is a Boston Review Book published by MIT University Press. He is the author of the chapter on insurrections in A Blackwell Companion to American Military History and the chapter on Ron Chernow’s widely read biography in Historians on Hamilton (Rutgers University Press). His forthcoming book on the extremes that Hamilton went to in bringing about the national finance scheme, and Thomas Jefferson’s furious, failed effort to undo that scheme, is now under contract to Farrar, Straus and Giroux. 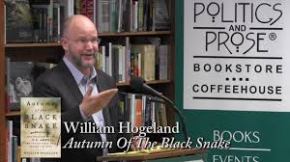 “For William Hogeland, thinking about history is an act of moral inquiry and high citizenship. A searching and original voice.”
— Rick Perlstein

“Insight, verve and an eye for the telling detail. A complex reading of minds and motivations.”
— The Wall Street Journal

“Political maneuvering of the kind that would make [a political] strategist’s mouth water.”
— The Washington Times

“Full of smart, unsettling observations that will enlighten — and discomfort — liberals and conservatives alike.”
— Stephen Mihm, University of Georgia