Charles Rappleye, in an op-ed published by the L.A. Times on August 12 (I just caught up with it via the Bangor Daily News), might seem at first glance to be saying pretty much what I’d been saying in my New Deal 2.0 post of August 1 (also on AlterNet and Salon) regarding the framers of the Constitiution and the issue of public debt — a subject especially relevant to specious Bachmann/Norquist/Tea Party efforts to construct balanced budgets and zero debt as constitutionally essential.

Liberals will tend to like Rappleye’s piece for suggesting that enlightenment minds of the kind liberals admire had a logical, well-informed rationale for founding the nation on a public debt supported by taxes. The piece thus flies in the face of certain right-wing preconceptions, and it may be taken as giving modern liberalism at least as strong a claim as the Tea Party’s on the founding generation’s values regarding financial issues so hotly debated today.

But beyond noting that contrary to the populist right’s view, the Constitution was in fact created largely in order to fund a national debt via federal taxation (an assertion outrageous enough for Constitution-romanticizers both left and right), Rappleye and I take directly opposing views of the significance of that founding debt, and especially of the domestic goals of the confederation Congress’s financier, Robert Morris, a mentor of Alexander Hamilton, in yoking a large public debt to national aims, indeed to the aim of having a nation at all.

Employing a tone of knowledgable, disinterested, slightly amused, “above the fray” superiority, which I find all too typical of commentary that we might  borrow a term from Leslie Fieldler and call “liberaloid,” Rappleye must lionize Robert Morris (Rappeleye is the author of a Morris biography that does so on a larger scale), playing up certain features of Morris’s goals and ideas, downplaying others, and declining to give the economic context that, from a modern liberal point of view anyway, would substantially darken the Morris-Hamilton founding-finance story. END_OF_DOCUMENT_TOKEN_TO_BE_REPLACED 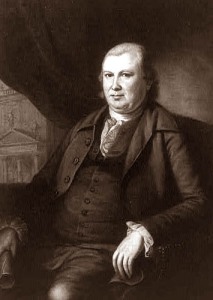 hold onto your wallets

New post on Robert Morris, our first central banker, in my “Founding Finance” series at New Deal 2.0.  I take issue with the defense of Morris by Charles Rappleye in his recent biography — my point, though, is not to excoriate Morris but to understand where he wanted to take the country and why. Readers of The Whiskey Rebellion already know all this — but anyone who doesn’t know much about Morris is likely to be as amazed as I was when I first encountered him. Great character. He’ll make reappearances in later entries in the series. Also: happy to see the series getting picked up by Alternet, Truthout, and Naked Capitalism, among others — and happy to be posting at New Deal 2.0.