The following is the Christmas story that I know, or I guess I should say that I like (along with Jean Shepherd’s): my only-slightly-tweaked version of the Bible story that I and so many others grew up on. This is the origin of traditional crèche Nativity scenes dusted with snow on the village green, the Xmas parts of “The Messiah” [UPDATE: Well, no, the wise men are not in “The Messiah”], the festivals of lessons-and-carols, etc. The narrative below blends and trims a big chunk of Luke 2 with a small chunk of Matthew 2 (Luke and Matthew are the only Biblical gospels with any Nativity story), and the last line is one of my favorites in all of both Bibles — not that I know all or even most of the lines even in one of them. It’s all King James. Further remarks on sources and significance follow today’s reading.

And it came to pass in those days, that there went out a decree from Caesar Augustus that all the world should be taxed. And all went to be taxed, every one into his own city.

And Joseph also went up from Galilee, out of the city of Nazareth, into Judaea, unto the city of David, which is called Bethlehem (because he was of the house and lineage of David), to be taxed with Mary his espoused wife, being great with child.

And so it was, that, while they were there, the days were accomplished that she should be delivered. And she brought forth her firstborn son, and wrapped him in swaddling clothes, and laid him in a manger, because there was no room for them in the inn.

Now when Jesus was born in Bethlehem of Judea, behold, there came wise men from the east, saying, Where is he that is born King of the Jews? For we have seen his star in the east, and are come to worship him.

And, lo, the star, which they saw in the east, went before them, till it came and stood over where the young child was. When they saw the star, they rejoiced with exceeding great joy.

And they saw the young child with Mary his mother, and fell down, and worshipped him. And when they had opened their treasures, they presented unto him gifts: gold and frankincense and myrrh.

And there were in the same country shepherds abiding in the field, keeping watch over their flock by night. And, lo, the angel of the Lord came upon them, and the glory of the Lord shone round about them: and they were sore afraid.

And the angel said unto them, Fear not: for, behold, I bring you good tidings of great joy, which shall be to all people. For unto you is born this day in the city of David a Saviour, which is Christ the Lord.

And this shall be a sign unto you: Ye shall find the babe wrapped in swaddling clothes, lying in a manger.

And suddenly there was with the angel a multitude of the heavenly host, praising God and saying: Glory to God in the highest, and on earth peace, good will toward men.

And it came to pass, as the angels were gone away from them into heaven, the shepherds said one to another: Let us now go even unto Bethlehem, and see this thing which is come to pass, which the Lord hath made known unto us. And they came with haste, and found Mary, and Joseph, and the babe lying in a manger.

And when they had seen it, they made known abroad the saying which was told them concerning this child. And all they that heard it wondered at those things which were told them by the shepherds.

But Mary kept all these things, and pondered them in her heart.

1. That last line may be a breakthrough in narrative technique. Not sure. Anyway, the sudden close-up of psychological realism, humanism, intimacy — and yet mystery — of what the young mother may have been making of all these things is kind of breathtaking. It first got to me somehow when I was, I think, about six. END_OF_DOCUMENT_TOKEN_TO_BE_REPLACED 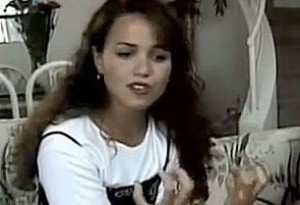 Ye have heard that it was said by them of old time, Thou shalt not commit adultery: But I say unto you, That whosoever looketh on a woman to lust after her hath committed adultery with her already in his heart. And if thy right eye offend thee, pluck it out, and cast it from thee: for it is profitable for thee that one of thy members should perish, and not that thy whole body should be cast into hell.

Shockingly (not), I haven’t seen any criticism of the nubile O’Donnell’s faulty theology. She got Jesus manifestly wrong, but nobody seems to care what Jesus said. They care about what O’Donnell said, once, and irrelevantly to anything important now. The debate on this goofball topic, if it can be called a debate, or a topic, has come down to: “See? Jesus jumpers hate pleasure” versus “Damn, how did they find that stupid footage?”

But I think what the New Testament says on these matters is worth reviewing, and that Christians who misquote it raise questions, especially when they grow up to offer political leadership.