C-SPAN video of that talk I gave on Alexander Hamilton’s creative phase.

Grimly funny to me that after I spent the whole talk emphasizing, ad nauseam, that Hamilton’s purpose was not to pay off the war debt but to sustain it via funding, C-SPAN introduces the video this way: “Mr. Hogeland examines how Hamilton’s first goal was paying off the debt accumulated during the Revolutionary War.”

There really is no purpose to anything I do.

… is an actual published and edited essay in Lapham’s Quarterly. Here I’m slashing a lot of brush, in the interest of starting a new American civics, with a new approach to American history.

(This is sort of Part Three, following this and this.)

It’s become a fad in the so-called resistance to Trump to project on the American founding generation not mere wisdom and judgment but the gift of prophecy. “220 Years Ago George Washington Warned Us about Trump,” reads the headline for an article in “The Hill,“ a good example of its type. Drawing on the famous farewell speech, the article concludes that our first president had “his inner eye” on our current president.

Nobody has taken this brand of pseudohistorical silliness farther than Peter Daou, a prolific Clinton supporter and busy social-media personality. According to Daou, Alexander Hamilton too gazed into the future and saw a vision of the 2016 election. Many, many times now, Daou has reported on Twitter how gobsmacked he was to discover Hamilton’s predicting, in 1792, that “the only path to a subversion of the republican system of the country is by flattering the prejudices of the people, and exciting their jealousies and apprehensions, to throw affairs into confusion, and bring on civil commotion.”

As if that weren’t mindblowing enough, in the crystal ball appears a figure so horribly familiar that Daou calls the epiphenomenon chilling: “When a man unprincipled in private life,” Hamilton goes on,

desperate in his fortune, bold in his temper, possessed of considerable talents. . . — despotic in his ordinary demeanor — known to have scoffed in private at the principles of liberty — when such a man is seen to mount the hobby horse of popularity — to join in the cry of danger to liberty — to take every opportunity of embarrassing the general government and bringing it under suspicion — to flatter and fall in with all the nonsense of the zealots of the day — it may justly be suspected that his object is to throw things into confusion that he may “ride the storm and direct the whirlwind.”

“And yes” Daou assures us of the quotation, “it’s real, believe it or not.”

But it’s only sort of real, and the quotation’s slipperiness illustrates the futility, for any real resistance to the current presidency, of this “wowza!” brand of founder-worship. END_OF_DOCUMENT_TOKEN_TO_BE_REPLACED

At least twice now I’ve been exposed to the notion that criticizing the musical “Hamilton” for its historical tendentiousness is like criticizing Shakespeare’s history plays for their historical inaccuracy, with the presumption — so obvious, the implication goes, that it’s not even worth stating, let alone arguing — that only a cluck would attempt to criticize Shakespeare on that basis because Shakespeare. The historian R.B. Bernstein invoked the Bard in this context when moderating a panel discussion at a conference of historians. Martha C. Nussbaum, the scholar of philosophy, law, and government, did so too when declining to respond to my argument, editorially solicited, that an uncritical participation in emphasizing the American founders’ reading and thinking, at the expense of examining their action, leads ironically yet ineluctably to acceptance and even celebration, in Nussbaum’s Boston Review essay “Hamilton’s Choice,” of the hagiographic history that served as inspiration for the musical.

This Miranda-Shakespeare comparison seems a natural hook when Miranda’s fans are defending the musical against what they take to be criticism of the show’s historical inaccuracy, because Shakespeare’s famous history plays, from Julius Caesar to the Wars of the Roses cycle and beyond, aren’t history either. Nussbaum puts the comparison in this (strange) way:

. . . literal veracity matters rather little [in the Hamilton musical], no more than it matters to a just appreciation of Shakespeare’s political ideas that he may have based too much on Plutarch and not studied a wider range of historical sources for ancient Rome. There are flaws in Shakespeare’s political understanding of monarchy and its relationship to the populace, and sometimes these do show up in a one-sided use of his source materials, particularly in Julius Caesar, where he gives Cicero and the republicans short shrift. But one could have seen those flaws had the play been a total fiction, since his disturbing ideas about the inevitable venality of the people are evident from the play alone.

Nussbaum seems to be saying that, in an alternate universe in which the play Julius Caesar lacks any reference to specific historical events (so probably isn’t titled Julius Caesar?), we’d still be able to see the flaws, as Nussbaum calls them, in the view of monarchy and populace presented, back here in our universe, by the play called Julius Caesar. And I think that assertion achieves, in a revealing way, a gibbering meaninglessness only partially masked by sober-sounding terms like “matters rather  little” and “just appreciation.” It’s absurd to imagine a Shakespearean view of monarchy and populace, flawed or otherwise, independent of actual Shakespeare works; it’s absurd to imagine any Shakespeare history play independent of that play’s relationship to specific historical narratives. In considering how such issues develop in Julius Caesar, a handy place to look might be, oh, I don’t know, maybe the events involving the death of a guy named Julius Caesar. That’s where Shakespeare looked, and it seems to me that it actually is important, if not, necessarily, to enjoying a production of one of the plays, then to any critically informed appreciation of Shakespeare, to reflect on his biases regarding democracy and monarchy — I lack the apodictic certainty to label them flaws — in part by considering his relationship to sources.

Nussbaum, for one, has done exactly that. Her close consideration of Shakespeare’s sources is reflected in the quotation above. Yet regarding the Hamilton musical, she hasn’t considered sources — that’s what I was trying, pointlessly, to point out. The difference between Shakespeare and Miranda, in the context of scholarly thinkers’ defense of the musical, has to do with such thinkers’ blithe inattention to Miranda’s sources.

And that difference points to an even more important difference. END_OF_DOCUMENT_TOKEN_TO_BE_REPLACED

UPDATE: How can this matter right now? That’s something I imagine readers thinking, and it’s something I thought, when first asked to respond. And that was before election day. Right now it matters to me this way: You can blame Trumpism and be correct. My job is to blame the certified liberal-intellectual culture that has prevailed throughout my lifetime. We own this. 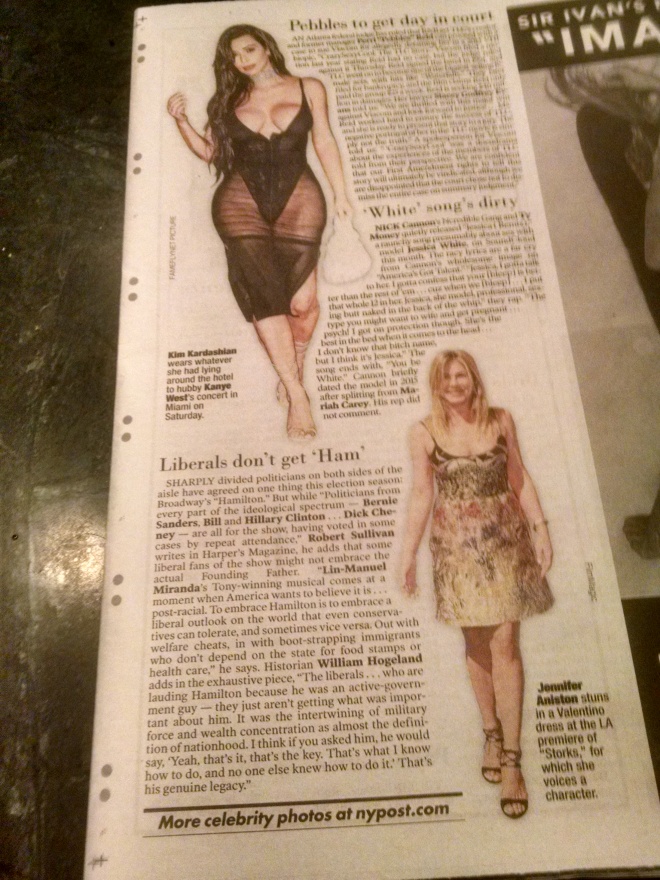 After ripping into a Huffington Post article on Hamilton the other day, I get a call from the people involved saying, basically, “you’re right, we were wrong.” Since nobody’s ever changed their mind before, I consider this a benchmark historical moment. Then, even more graciously, they had me on a podcast to talk about it, starting at 22′. Just to be clear: despite the headline, I don’t think Hamilton is overrated. Also, I seem to be swallowing my words in uncharacteristic fashion, but y’all know my rant anyway …